A social network is a network of nodes connected with links.  Think of customers calling each other, people exchanging emails, companies lending money to each other or fraudsters collaborating as part of a collusion.

The nodes in social networks are usually not randomly linked together. Since these networks typically represent people’s social interactions, there is always a reason for the connection. The reason for links to specific people is that they share a common property. For example, common interests or same origin. Homophily is a concept that stems from sociology where it usually described as “people have a strong tendency to associate with others whom they perceive as being similar to themselves in some way, e.g., live in same city, have same hobbies or interest”.  It is also often referred to as “Birds of a feather flock together”. The figure shows an illustration of homophily in a call network. 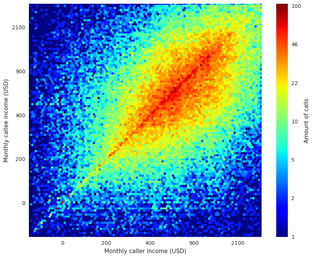 Fixman, Martin et al. (2016) illustrated that people tend to call other people of the same economic status.  You can see a clear correlation between the monthly caller and monthly callee income.  Hence, this is strong evidence of homophily between people with similar income levels. 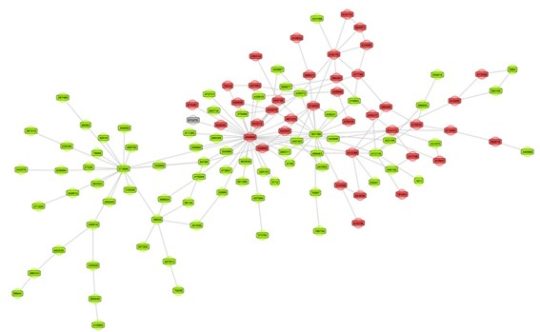 In the below example, the connectance equals 20%. 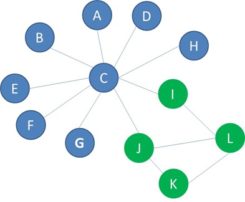 Dyadicity measures the connectedness between nodes with the same label. As an example let’s look at the below two networks.  Both of them have 12 nodes, 8 that are blue and 4 that are green. Clearly the distribution of the green and blue nodes is different. In the network on the left there is only 1 edge between the green nodes, but on the right there are 4. There is higher connectedness between green nodes in the network to the right. 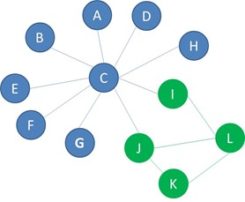 For a network to show signs of homophily, it is not enough for nodes of the same label to be more connected.  There should also be fewer connections between nodes of opposite labels. This is measured with heterophilicity, which is the other parameter you need to capture the interplay between the network structure and node properties. Heterophilicity measures the connectedness between nodes with opposite labels and thus how much interaction there is between the nodes with different labels. Let’s take a look at the below two networks, which both have 8 blue nodes and 4 green nodes. We represented the cross-label edges with a thicker line. In the network on the left there are 6 cross-label edges.  In the network on the right, there are 2 cross-label edges.

We now learned how to compute the dyadicity and heterophilicity of a network.  Both parameters are necessary to capture the detailed interplay between the network structure and node properties. But how do they relate to homophily? One of the essential questions before doing predictive analytics using networked data, is deciding whether the predictive models might benefit from social network analytics. In the case of predicting fraud, do the relationships between people play an important role, and is fraud a contagious effect in the network? Are the two labels randomly spread over the network, or are there observable effects indicating that there is a social phenomenon, in other words, do fraudsters tend to cluster together. In terms of the network structure, this means that connections amongst nodes with the same label are more common, in other words that the network is dyadic, and that connections between nodes with different labels are rarer, in other words., that the network is heterophobic. As you recall, homophily is characterized by nodes of the same label being more connected to each other and nodes of opposite labels being less connected to each other.   The network shown below has dyadicity greater than 1 and heterophilicity less than 1. Therefore, we can infer that this network is homophilic and use it for predictive analysis. 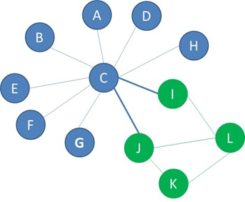 Now you should be able to determine whether a network is homophilic based on its dyadicity and heterophilicity.  Note however, that these are not absolute values. The network can be homophilic even though it is only either dyadic or heterophobic, or if the values for dyadicity and heterophilicity are only slightly different from one. The important thing is that the distribution of the labels is not random and we can use the information to make predictions in the network. A network that exhibits evidence of homophily, is worthwhile to investigate more thoroughly. For each node, we will do featurization, which means we extract features that characterize the node based on its position in the network.  The predictive analytics technique used subsequently (e.g., logistic regression, decision trees, XGBoost, neural networks, …) can then indicate whether these features turn out to be significant or not.