The diﬀerent classiﬁers considered here and the tuning grid for their meta parameters are given in table 1 (click to enlarge). 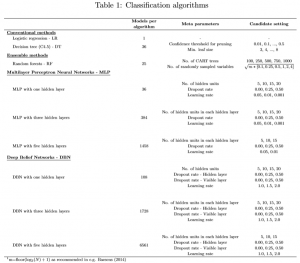 A logistic regression model estimates a probability of a borrower defaulting on a loan by using the logistic function. Decision trees however are recursive partitioning algorithms that come up with a tree like structure representing patterns in the data with the aim of partitioning the data into groups that are as homogeneous as possible in terms of the variable to be predicted. Ensemble models estimate multiple analytical models instead of using only one model. Random forests is one such method that creates an ensemble, a forest, of decision trees during training and then the forest outputs the class that the majority of the trees predict. Key in this approach is that each tree in the forest sees a random bootstrap sample of the data and also that a selection of a random subset of attributes is carried out at each node. Therefore the trees will diﬀer and the ensemble will be superior in performance then its base classiﬁers. Two deep learning algorithms, a multilayer perceptron network (MLP) and a deep belief network (DBN), were also considered. A relu activation function was used in the hidden layers of the MLP network and a softmax function with two neurons was used in the output layer of that network. This network has no inherent ability to solve complex function since its weights are initialized randomly. But then each layer is allowed to propagate their activation to forward layers and iteratively ﬁx their weights during backpropagation which aims at minimizing the diﬀerence between the actual output vector of the network and the desired output vector. Here rmsprop backpropagation was used to speed up gradient descent. A DBN is a constructed by using several layers of restricted Boltzmann machines (RBM). An RBM is a bipartite graph in which visible units represent observations which are connected to units in a hidden layer which learn to represent features using weight connections. The DBN aims at maximizing the likelihood of the training data, therefore the training process starts at the lowest level RBM were visible layer is the input vector. Then the training progressively moves up until ﬁnally the RBM, containing the outputs of the DBN, is trained. By doing this sequence of operation one obtains a unbiased sample of the kind of vectors of visible values (inputs) the network believes in. This training process is unsupervised but can easily be turned into a classiﬁcation model by adding a additional layer to the model which simply tunes the existing feature detectors that were discovered during unsupervised training using backpropagation. Dropout was used when training both the MLP and DBN models to prevent overﬁtting.

All models considered in this comparison, except logistic regression, exhibit meta-parameters that need to be speciﬁed by the user. Both the MLP and the DBN networks were constructed using one, three and ﬁve hidden layers. The number of models that one needs to consider for these networks grows exponentially with the number of hidden layers used. Constructing these models is a computationally expensive task that often requires training many networks with diﬀerent conﬁguration to obtain a good solution which can be seen as a drawback of these models.

The classiﬁers were compared over three data sets and four performance measures; the AUC, The Brier score, the partial-Gini and the EMP measure. Two main conclusions emerge from this comparison. Firstly, random forests is the overall best performing classiﬁer over all data sets and performance indicators. Furthermore the classiﬁer performs statistically signiﬁcantly better then all other classiﬁers considered, except logistic regression. Secondly, deep networks with a number of hidden layers do not perform better then shallower networks with one hidden layer in general. It should also be taken into account in this comparison that the deep networks come with much greater computational cost then other classiﬁers considered here since the number of models that one needs to construct to adequately tune the meta parameters of the models grows exponentially with the number of hidden layers. Deep learning has been successfully applied to a number of diﬀerent ﬁelds and has turned out to be very good at discovering intricate structures in high-dimensional data. However, the data sets used here, and in credit scoring in general, would not be considered to be very highly-dimensional. This could be seen as a possible reason why the deeper networks don’t provide considerable improvements on the performance of their shallower counterparts. From the above one can conclude that deep learning algorithms do not seem to be appropriate models for credit scoring and that random forests should continue to be considered as a benchmark method for credit scoring.

Do you also wish to contribute to Data Science Briefings? Shoot us an e-mail (just reply to this one) and let’s get in touch!